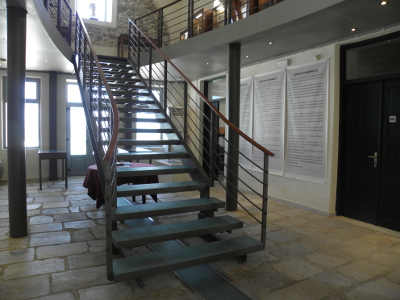 The mission of the Iakovos Kambanellis Theatre Museum is to become a cultural and theatre center which will showcase and promote the oeuvre of the great writer as well as work by other contemporary Greek playwrights in Greece and abroad.

~ Our aspirations are to create a very lively center, with many activities throughout the year, and for the Museum to become an influential theatre-arts center, serving schoolchildren, university theatre majors, and drama-school students, as well as a major research center for the study of all aspects of the Kambanellis oeuvre and modern Greek theatre. The Iakovos Kambanellis Archive is being digitized and transferred to Naxos, thereby constantly expanding the Museum library’s holdings.
~

In addition, the Museum hopes to lay the foundation for the beginnings of a major research project which will investigate the uninterrupted development of Greek theatre, from ancient drama to contemporary theatre texts, as well as trace the entire historical course of the theatre as an art form in the country of its birth.