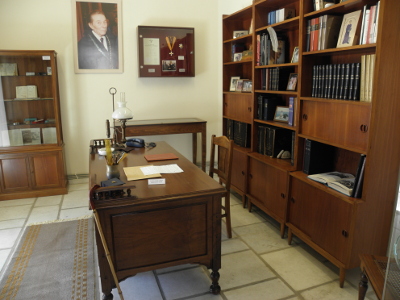 The Iakovos Kambanellis Theatre Museum opened during the summer of 2016 in the playwright’s birthplace, Naxos. A collaboration between the Municipality of Naxos and the Lesser Cyclades and the South Aegean Region, the Museum is housed in a renovated historical stone building in the island’s main town of Chora in the Grotta district, where Kambanellis was born and raised.

The playwright’s daughter, Katerina Kambanelli, has gifted to the Museum a wide range of personal effects: archival material; the writer’s entire office, including part of his personal library; two academic robes worn during the award ceremonies for the Honorary Doctorate from the University of Cyprus (1996) and Aristotle University of Thessaloniki (1999); the Academy of Athens medal and the award from the President of the Hellenic Republic; other award medals and honorary plaques; playbills and performance programs; set and costume sketches; portraits of the writer; pencil drawings and small art objects created by the writer. Visitors can also watch digitized videos of broadcast interviews and films which Kambanellis directed or wrote. In addition, for research purposes, they may access all his published works and currently available translations.

The Museum also offers theatre workshops for children and adults, including workshops in playwriting, with performances of workshop productions free and open to the public. Every week a film directed or written by Iakovos Kambanellis is screened. Additional events include staged readings, book presentations, lectures, and concerts.